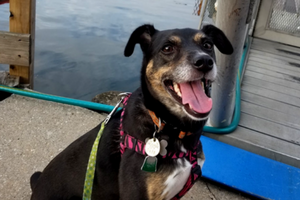 The day that Abby Podratz and her husband Robert Brooks of Baltimore, Maryland, met their mixed breed dog is a day that they will never forget.

The couple went to a local foster home that was fostering some pups, when one of them jumped into Robert's lap and fell asleep. There was no way Abby and Robert could say no to that sweet and loving puppy, and brought her home with them. Now they needed to find a name for their new furry family member.

Since then, Ruffy the Vampire Slayer has learned several tricks, including high fives for 'Girl Power' and has accidentally learned how to whine to the tune of "Good King Wenceslas." One of her favorite pastimes however, is watching "Planet Earth" with the polar bears and looking behind the television when they are no longer on screen.

Given that Ruffy the Vampire Slayer often thinks she's an acrobat, getting pet insurance for her was a no brainer.

"We knew we needed to get pet insurance for Ruffy," said Abby. "It gives us a peace of mind knowing that if anything were to happen, we have it as a financial back up."