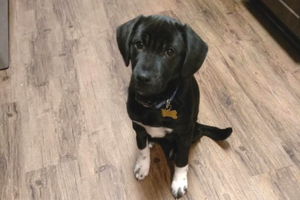 When Britney Colantonio of Charlotte, North Carolina, learned of puppies that needed a new home, she and her parents were eager to adopt. With one puppy joining her parents' family, Britney welcomed a littermate to join her two-year-old dog, Winston Furchill.

With a knack for clever names, Britney and her boyfriend, Corey, started on the search for a name that was fitting for their newest companion. With a love of history and a good pun, Britney and Corey looked to Winston Furchill for inspiration.

"We wanted Winston and the newest addition to be best of friends," said Britney. "We looked to history and recalled the relationship between Winston Churchill and Franklin Roosevelt. It took us a while but eventually we came up with the perfect name, Franklin Woofsevelt."

Since bringing him home, this "chubby ham" has proven to be quite the sweetheart, attached to his pet parents at the hip.

Britney recalls the first time they took Franklin Woofsevelt to a dog park where he attempted to make new friends. After about an hour, Franklin worked up the courage to join the other dogs but was quickly overwhelmed and sought out Britney. He frantically made his way back, searching high and low for Britney until he found her, then continued to remain by her side the rest of the day.

After discovering that pet insurance was offered as an employee benefit through her employer, Britney signed up Franklin and Winston for pet insurance through Nationwide.

"I wanted to make sure we had protection for the unexpected," said Britney. "Puppies get into anything and everything. Having pet insurance gives us peace of mind that if we run into any medical issues, the insurance will help offset veterinary expenses."