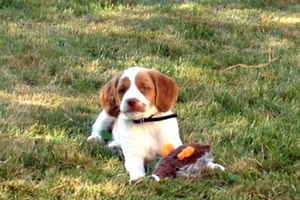 When the time came for Lisa McDowell of Wyandotte, Michigan, to add a new puppy to her family, she knew the name would represent her favorite sport of hockey. With the help of her friend Todd and his wife Aurora, Lisa went back and forth on what to name the 10-week-old Brittany Spaniel.

"Prior to picking up her new puppy, Troy, Aurora and I were throwing around names of hockey players, and hockey related equipment and joked about naming him after the Stanley Cup," said Lisa. "In the photos I saw of him, he had a mark on the side of his face in the shape of a duck, so I decided to name him Ducky."

However, Ducky didn't last long. After picking up Ducky and watching him play in the yard, Lisa had a change of heart and quickly decided to switch his name to match his fast-paced personality. The way this little pup played in the yard with his litter mates reminded Lisa of a hockey player, especially when this tiny but mighty pup would aggravate his siblings.

"He's so spoiled, and being an only dog, he's the king of the house," said Lisa. "I went back to the idea of naming him after the Stanley Cup and the man who donated the cup, Lord Stanley. Eventually, Lord Stanley the Pup was derived and it's fit ever since!"

Lisa purchased pet insurance from Nationwide for Lord Stanley the Pup shortly after bringing him home to help offset any future medical costs.

"It's an easy way to keep up with the cost of veterinary bills," said Lisa. "It's important to treat our pets as a member of the family and he has medical insurance just as we do."