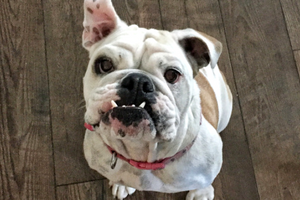 "I think pet names should reflect your pet's personality," said Cassandra. "It's okay to have fun with the name and love it, but your pet will definitely tell you their name in some way."

When it came to naming their newly adopted English bulldog, the couple knew the name must be fun and extraordinary to reflect her breed, but they also knew they wanted their dog to have a fancy English name. Cassandra and Michael went with the first words that came to mind when they first set eyes on their new puppy, "squishy face." With one part of the name down, the next step was to formalize their pet's name. After a week of tweaks to the name, Cassandra and Michael landed on a name that they both loved and felt fit their pup, Madame Squishy Van Wrinkleface.

It's been over a year since Madame Squishy Van Wrinkleface has found herself a home with the Georges and has spread so much love in the household.

After bringing a new pup into their home, the Georges knew pet insurance was necessary.

"We tell anyone with a pet about pet insurance. We feel it's a necessity," said Cassandra. "We're able to afford the best treatment at the best hospitals because we know pet insurance can offset expensive veterinary bills."