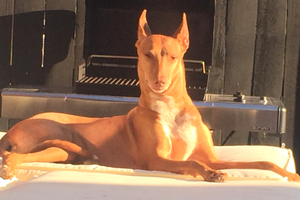 After losing their beloved family dog, Lisa and Stewart Colovin of Kansas City, Missouri, decided it was time to fill that missing void. The family traveled to Texas to bring home their new Pharaoh Hound and already had a name in mind, thanks to a children's poem.

"When she was born, her ears shot straight up," said Lisa "One night I woke up out of a sound sleep and her name came to me - Little Bunny Foo Foo, it's the name of an old children's song I know. We had the name picked out before we had her, but once we picked her up, we saw how accurate the name fit."

Little Bunny Foo Foo has now grown to be a sweet and loving "sun bunny" who loves giving kisses and laying in the sun. When she's not playing with her brother, The Yakuza, she's playing mom to her kitties, Cow and Chicken, who love to climb on her when she's laying on the couch.

Having owned dogs before and knowing that anything can happen, Lisa signed up both canines for Nationwide pet insurance when offered as an employee benefit through her husband's employer.

"Accidents happen all the time," said Lisa. "Our pets are our children and we want to make sure they have medical insurance coverage should anything happen."