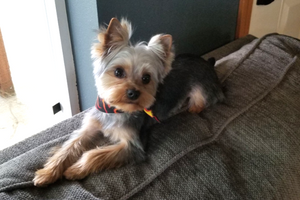 After one year in their new home, Twyla and Ryan Sirrine of Salem, Oregon, decided they were ready to welcome a new companion to their family.

As Twyla's birthday approached, she knew exactly what she wanted and didn't hesitate to send photos of a beautiful puppy to her husband as a hint. One weekend while Ryan was out of town, unable to hold off any longer, Twyla made the decision to visit the puppy and instantly knew he was the one. That same day, the 8-week-old Yorkshire terrier was welcomed into the Sirrine's home.

"We came across the name Chauncey Von Poops a Lot before we adopted him," said Twyla. "We wanted a unique name for our puppy. When we first heard the name, we loved it and knew that would be a perfect and proper name for our newest member."

Though Chauncey Von Poops a Lot is no bowtie wearing pup, he's one playful cuddle bug who loves tearing apart toys with squeakers and creating a whirlwind of fuzz. When he's not playing with toys, he's busy being a "foodie," but don't think you'll catch him eating the same food twice.

Having previously worked at a veterinary clinic, Twyla knew the expenses that come with having a pet, and immediately purchased Nationwide pet insurance for Chauncey.

"Family is family no matter how many legs they have," said Twyla. "Pet insurance allows for us to choose the quality of life over the financial obligation for our pets."