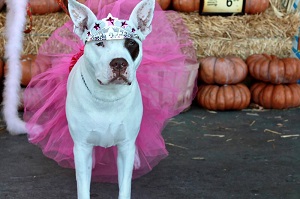 Wanting a name that would be fitting her pet, Madison Lee of San Jose, California, began the search for the perfect moniker for her newborn pit bull. Taking pieces from her life and her puppy's life, Madison thought of the unique moniker, Isabella Miss Worldwide Boo Boo.

For the first part of her pup's name, Madison looked to the popular series "Twilight" for inspiration.

"Pit bulls are often misunderstood and believed to be aggressive and unfriendly," said Madison. "In 'Twilight,' Bella is seen as awkward and somewhat of a misfit. I saw the similarities and knew Isabella would be part of her name."

Drawing more inspiration from her pet's breed, Madison thought of the rapper Pitbull, who often goes by the name "Mr. Worldwide," and added “Miss Worldwide” to Isabella's name. With a final touch, Madison used the day Isabella was born to complete her name; Isabella's birthday falls on Halloween, so Madison went with a "scary" theme and used "Boo Boo" to conclude her pup's name.

Madison purchased Nationwide pet insurance for Isabella Miss Worldwide Boo Boo shortly after bringing her home and has been grateful ever since.

"Having pet insurance is the most responsible thing to do for your pets," said Madison. "My pets are members of my family. If I have medical insurance, so should they."