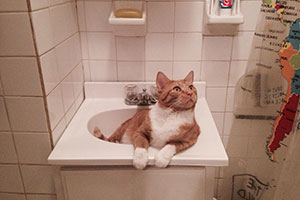 One day while walking home to their apartment in Brooklyn, New York, Ali Blacker and Peter Gerena noticed that a scraggly stray cat was following them. The fearless feline approached the couple with ease, which gave the impression that he already had a home. However, when the couple arrived at their destination and the kind kitty refused to leave, the duo invited him inside.

"We thought for sure he was someone's cat because of how social he was," said Ali. "We posted signs, posted online and had him scanned for a chip, but there was no trace."

The duo decided to take the homeless cat to the veterinarian for a checkup. The staff pointed out that the cat had not been neutered and had numerous small scars, pointing to signs that he was simply a friendly stray. Ali and Peter decided it was best that they adopt him, and the search for a name began.

"We thought he looked like a gladiator with all his scars," said Ali. "Then we remembered a scene from the movie 'Anchorman' that had a cat dressed as a gladiator named Whiskerus Maximus and it just stuck."

Since joining the family, Whiskers Maximus’ life has become much more relaxed. He enjoys lounging around the house and wrestling with his canine sister Penny. Ali signed Whiskerus Maximus up for pet insurance from Nationwide so they wouldn't have to worry about making difficult medical decisions based of finances.