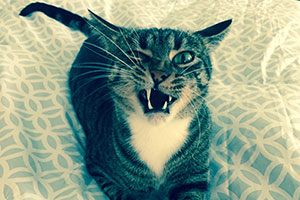 Having unique pet names is nothing new for Margaret Maczulski of Libertyville, Illinois. Margaret's father was a huge animal lover, and the family had always owned pets when she was a child. All of Margaret's childhood pets were given intricate names, garnering influences from cultures around the world. So when Margaret adopted a new 8-week-old kitten, the search for the perfect pet name began.

"He was a really smart kitten so I wanted to give him a name that represented intelligence," said Margaret. "I started researching historical figures and I came across Isaac Newton. The name Isaac Mewton just kind of came to me and I went with it."

Isaac Mewton has since become reflective of his name and grown into a very curious and active cat. He enjoys exploring the highest points in his surroundings and chasing his feline brother Patrick around the house.

Margaret has been a long time advocate of pet insurance and signed Isaac Mewton up with Nationwide as soon as she brought him into the family.

"My father was a doctor so I know how expensive medical care can be, and similar care for our pets can be nearly as expensive," said Margaret. "Having your pets covered could make the difference between saying goodbye and pursuing extensive treatment. I wish more people had it for their pets."