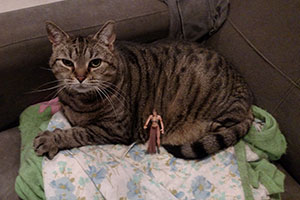 After deciding they needed a feline companion in their life, David and Heather August of Point Rocks, Maryland attended multiple adoption events in search for the perfect cat. They both pictured having a large, heavier set cat that could lounge around the house and relax with them. Eventually the duo stumbled upon a large cat at a rescue center with the name "Jabba."

"We're both big 'Star Wars' fans so we knew it was a sign," said David. "She was just kind of lying there, flicking her tail just like the scene from the movie. We decided to take her home and added 'the butt' to make her name fun."

Since being adopted, Jabba the Butt has proclaimed herself queen of the August residence and rules over her canine brothers Goober and Bisbee. Jabba has her own cat fortress in the home's converted basement and prefers to remain in her lair unless she wants attention on her terms.

David signed all of the family pets up for pet insurance from Nationwide after discovering his employer offered the perk as an employee benefit.

"We love having our pets insured," said David. "It's helped out a ton with medical expenses and it allows us to get the best treatment for our animals without worrying about what kind of impact it will have on our finances."