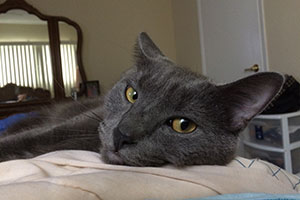 After rescuing a small kitten that was abandoned in a friend's yard, Arturo Davila of Glendale, California began his search for the perfect name. Arturo wanted something that represented the kitten's roots so he researched the markings of the cat. This discovery indicated he had markings from the Russian Blue bloodline, which gave the kitten numerous tiers of grey fur.

"I was looking at all the different shades of grey in his coat and the name just kind of came to me," said Arturo. "He's also really rambunctious and bites a little too much when he's excited so he has a similar personality to the main character from the series, Fifty Shades of Grey."

Fifty Shades of Graham’s name has been a hit with everyone who has met the frisky feline including the staff at his veterinary office.

"Fans of the series especially love his name," said Arturo. "We call him Graham for short, but whenever I call him by his full name, everyone around gets a chuckle out of it."

Arturo signed Fifty Shades of Graham up for pet insurance from Nationwide after experiencing the effects of high veterinary costs with his previous cat.

"I know that by having pet insurance for Fifty Shades of Graham I'll be covered if anything were to happen," said Arturo. "It's really great for preventive care as well and allows me to take him to the veterinarian for regular checkups without worry about costs."