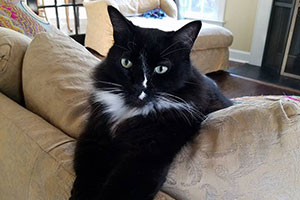 Gerard Smith and Amber White of Raleigh, North Carolina had no intentions of adopting a cat until a scrawny kitten followed the family as they walked their daughter home from school. When they arrived at their house they wanted to feed the crying kitten, but had no cat food so they searched their kitchen pantry. To the homeless cat's delight the duo found a can of crab meat.

"He got the royal treatment from the start," said Gerard. "We didn't adopt him completely at first. He was just kind of an outdoor cat that hung out around our yard. Eventually we brought him in and decided to make him part of the family."

After joining the family, Gerard and Amber searched for a creative name. They studied his personality and came to the conclusion that he was living two separate lives between his indoor life and outdoor life. That's when Gerard, who was a literature major in college, got the perfect idea.

"He was fun and loving inside the house, but wild and loved to hunt birds outside," said Gerard. "We also joked that he was fed the finest food since his first meal was crab. He reminded us of the character Jay Gatsby, and from that we formulated The Great Catbsy."

The Great Catsby now lives a more relaxed indoor lifestyle where he enjoys playing with Amber and Gerard's children and lounging around on Amber's yoga mats. The duo purchased pet insurance from Nationwide for The Great Catsby after he narrowly survived a major medical scare.

"We knew we had to get him insured after the cost it took to save him," said Amber. "We'd do anything for him and having pet insurance allows us to focus on his well being without dealing with the financial stress."

Sorry, only one cat vote allowed per day.