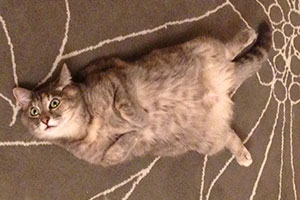 When Shawna Sherman of Hayward, California decided to bring a new female kitten into her home, she wanted to provide her with a unique name. Shawna had always thought ninjas were interesting and decided to use it as a base. After throwing around a few names with some friends, the name Ninja Killer Nine Thousand was formulated.

"I always like to give my pets super cool names," said Shawna. "People names can be kind of boring so I try to give my pets awesome names that a person would never be able to have."

Shawna signed Ninja Killer Nine Thousand and her canine brother DJ Nunchuck up for pet insurance after experiencing firsthand the costs that can be associated with veterinary expenses.

"My pets are like my kids and I want to make sure they're covered," said Shawna. "Having them insured allows me to focus on their well being rather than the cost of treatment."