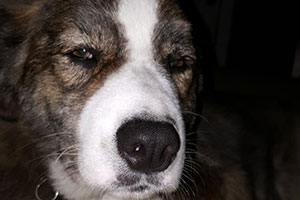 When Chad and Pam Nichol of Lone Jack, Mo. decided to get a puppy for their 9-year-old daughter, they didn't expect so much input from their 6-year-old son. The kindergartener's excitement over the thought of having a family dog prompted his insight on what he would name the dog if it were his own and not his sisters. Seeing the boy's excitement, Chad and Pam decided to bring home a second dog from the litter so that he could have his own canine companion.

"My son said if he had a dog he would name him SuperFun because it would be super fun to have a dog," said Chad. "When we surprised him with his own puppy, the first thing he said was 'he looks like a coconut.' He said the puppy's name should be SuperFunCoconutDog and we just went with it."

The Nichol's have had long list of uniquely named pets including a turtle named CaptainKlunkyPants and a fish named FancyTail.

"I think the best way to name a pet is to wait until you see them and their personality," said Chad. "Or you can just ask our kids and they'll tell you what the name should be."

SuperFunCoconutDog has now matured into a fun loving adult dog that enjoys doing tricks and playing tug-of-war. The family has adapted his unique name without the use of a nickname, always referring to him by his full proper name. Chad purchased pet insurance from Nationwide for the Australian shepherd mix after he was seriously injured and has proclaimed the family won't go without it again.

"We got pet insurance after SuperFunCoconutDog was hit by a car," said Chad. "We would do anything to get our pets the care they need and that incident showed us that accidents can happen at any time. Our pets deserve to be covered just like the rest of the family and Nationwide gives us that peace of mind."