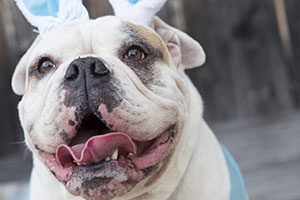 After bringing home her newly adopted English Bulldog, Elizabeth Shikiar of Wilmington, N. Car., sat down to unwind and watch a movie. As she relaxed with her rescue puppy, contemplating possible pet names, she looked up at her T.V. and got an idea.

"I was watching the movie 'Superbad' and I heard the name Mcloven," said Elizabeth. "I was already thinking of something along the lines of 'Stud Muffin' because he was so cute and then it just all came together with Mcloven the Stud Muffin."

Elizabeth has always given her pets exceptional monikers, because she feels their title should represent their persona.

"I try to look at their personality or situation," said Elizabeth. "Mcloven’s name has to do with his looks, but that's not all I look at. I have a cat named Stormy who got her name because we saved her from a major storm when she was a kitten."

Mcloven the Stud Muffin is now 83 pounds and lives a wonderful life alongside his Bulldog sister, Cupcake the Cutie. The partners in crime love to watch television together, and are especially fond of cartoons. They also enjoy going on walks as long as they get to enjoy chicken from their favorite restaurant afterwards.

"I think having pet insurance is important," said Elizabeth. "After Mcloven's injury, I made sure all my pets have medical coverage."