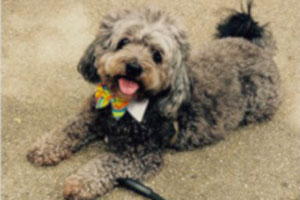 When ChaChi Big Foot's new owner brought him home from a local shelter, he was deathly thin and malnourished. In fact, he was so skinny that his paws looked massively oversized compared to the rest of his body, prompting the initial name of Big Foot. However, after becoming acclimated to his new surroundings, Big Foot's appetite surfaced and so did his enthusiastic personality.

Big Foot's owner began to notice that when the small mixed breed would get excited, he would stand up on his hind legs and walk around almost as if he was dancing the Cha Cha. His owner decided to incorporate his new routine into the moniker with a slight twist and the moniker of ChaChi Big Foot was born.

ChaChi Big Foot is now 7 years old and has become a popular neighborhood commodity. His hysterical name and regal disposition have made him a local favorite, especially with the older members of his community. He is incredibly social and never shy, especially when offered a treat to do his happy dance. Cha-Chi Big Foot is very well trained and hopes to become a therapy dog someday, and bring happiness to all.

ChaChi Big Foot's owner enrolled him in pet insurance through Nationwide after the support she received with her previous dog's illness.