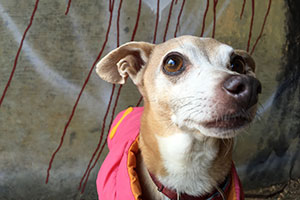 San Francisco, Calif. natives Erin Neff and Mark Ristich had no interest in becoming pet parents until visiting a local park on New Year's Eve and seeing a group of happy dog owners. The couple contemplated whether bringing a dog into the family was a good idea, when randomly, Mark’s mother called with an opportunity for the duo to adopt a tiny Italian Greyhound puppy.

"We didn't really set out to get a dog", said Erin. "She just kind of came into our lives. But she quickly became our baby," said Erin. "She was our first pet, so it took us quite a while to name her and pet insurance is part of the story."

During their search for the perfect moniker, Erin and Mark decided to incorporate influence from one of their favorite shows, Democracy Now with reporter Amy Goodman. The couple combined the famous journalist’s initials and came up with the name Aggie. However, the name rapidly acquired more elements after Erin spoke to a friend about pet insurance.

Insuring Aggie seemed like a great idea so I called Nationwide and the first thing they asked for was my dog's full name," said Erin. "I told them Aggie, but instantly thought it needed more and added Von Schwaggie on the fly. She's a little dutchess and I wanted a name that represented her. Von Schwaggie just fit."

Aggie Von Schwaggie has now grown into a loving and social member of the family who enjoys long walks and tagging along during bike rides.