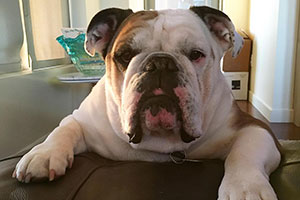 After hearing from a friend that an English Bulldog was in dire need of a new owner, Joe Galante of Bellevue, Wash., stepped in and offered his home. The huge Bulldog was 10 months old and already responded to his given name, Optimus Prime, which was fine with Joe who just so happened to be a big Transformers fan. But when the two first met, Joe got an idea to enhance the name.

"When I went to pick him up, he was so beefy and looked like a huge hunk of meat with a dopey Bulldog face," said Joe. "The name Prime Rib just kind of came to me so I put it all together and his full name became Optimus Prime Rib."

Optimus Prime Rib, loves his new life with Joe. He’s 67 pounds of pure energy and strength with an addiction for Tug-of-War. However, his masculine demeanor doesn’t take away from his need for being cuddled and his misconception of what a lap dog is.

“He’s got such a sweet temperament, he’s like a gentle giant,” said Joe. “He’s even got a really high pitched yip that he makes when he wants attention. He’s a Transformer at heart and goes from a big strong dog to adorable in an instant.”

Joe enrolled Optimus Prime Rib for pet insurance from Nationwide as preparation for taking on a dog breed that is prone to medical issues.

"I know Bulldogs can have medical problems and having pet insurance gives me peace of mind," said Joe. "I know that if Optimus Prime Rib ever needs surgery or a major procedure that I'll be covered."