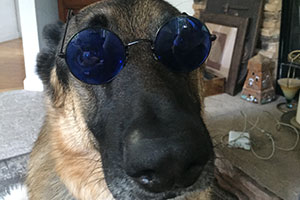 As Tom Melninkaitis of Waterford, Conn., was en route to pick up a young male German shepherd puppy with his family, he envisioned giving him a masculine name like Maximus. However, his young son had other ideas and proposed the name Waffles after his favorite food. By the time they got home, the Melninkaitis family compromised and the moniker Maximus Waffles was born.

"We thought it was pretty funny and still a little bit masculine so we went with it," said Tom. "People generally think it's a cool name, and we think it's wonderful."

Maximus Waffles has now grown into a perfect family dog who loves going for car rides and playing fetch. He has even embraced his role of backyard guardian, constantly chasing deer and other critters out of his territory.

The Melninkaitis family purchased pet insurance through Nationwide after discovering it was a voluntary benefit through one of their employers.

"Pet insurance has been great for us," said Tom. "Shortly after we enrolled, Maximus Waffles became ill and required surgery on his stomach. Having pet insurance really helped offset his medical costs."