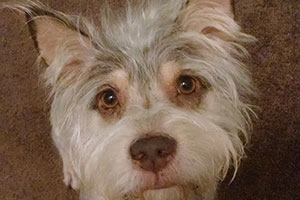 When Dave Pawlik of Santa Clarita, Calif. went to a local animal shelter looking for a dog to adopt, he wasn't quite sure what he would end up with. However, as he passed by the numerous excited dogs he noticed an older small mixed-breed dog sitting quietly by himself. Dave asked if he could meet the scraggly canine and the volunteers agreed, but warned that the dog had shown some aggression towards men.

"He just looked sad and I wanted to meet him," said Dave. "He had scruffy hair, some missing teeth and his tail looked like it had been injured at some point. They warned me that he was aggressive, but when I went in his kennel, we bonded instantly. He jumped on my lap and I knew I had found what I came for."

After bringing home his new dog, Dave started devising a name. The dog’s rugged appearance led Dave to the name scrappy, assuming that he had been in a few scuffles, but the dog's white ruffled fur made the name Scruffy a fit as well. While contemplating these names, Dave also thought of Scottish name puns because the dog seemed to be a West Highland terrier mix and came up with the name Macdoogle.

"I put all the names together," said Dave. "I've always liked unique names so I went with it and came up with Scrappin Scruffy Macdoogles of the Highland Mcdoogles. People are usually a little caught off guard when they hear his name, but everyone likes it."

Scruffy (as he’s referred to in short) has become Dave’s loyal sidekick. Scruffy loves the outdoors and playing fetch, but also enjoys just hanging out on the couch with everyone. Dave purchased pet insurance shortly after adopting Scruffy as preparation for any future veterinary costs.

"I think pet insurance is definitely worth the cost," said Dave. "I know I'll end up paying out of pocket to help Scruffy if anything was to happen, and having Nationwide can help alleviate the expense."