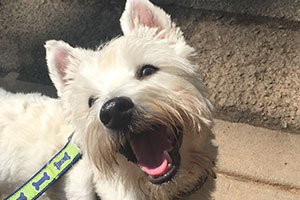 When Ben Jarrett and Katie Goldstein of Atlanta, Ga. decided to add a puppy to their family, the West Highland terrier breed was at the top of their list. Katie grew up with West Highland terriers in her family so the choice was easy. After a short search, the couple brought home a young male puppy and began their quest for a name.

As the duo toyed around with amusing monikers, the topic of Kanye West came up. The popular artist happens to be one of Ben's favorite musicians, and after a few pun-filled jokes, the name Kanye Westie was born.

"The name just kind of came to us," said Katie. "It definitely fits his personality. He absolutely loves attention and is obsessed with shoes, just like the real Kanye."

Kanye Westie is a playful puppy with a ton of energy that will do just about anything for a belly rub. Ben and Katie purchased pet insurance from Nationwide shortly after bringing him home and have found their policy helpful, especially the vethelpline. Kanye Westie is still young and has the naughty puppy habit of chewing on his parents' shoes, which has led to some scary medical moments.