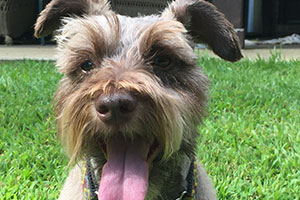 After Sarah Jarmon and her husband of Moscow, Tenn. brought home their new Miniature Schnauzer puppy, the search for a superb name began. The puppy's crisp chocolate coat inspired the initial name of Angus, but Sarah knew it needed more.

"We liked Angus, but it felt incomplete," said Sarah. "We wanted something that represented his personality so we took a few days to watch him and really get to know him. That's when we discovered his adorable butt wiggle."

As he adjusted to his new home, Angus’ light-hearted and warm charisma shined bright, which was accompanied by an inability to control the velocity of his tail wags - causing his butt to wiggle with excitement. Sarah got the idea to add Wigglebottom to the name and bridged the gap with "Von" to represent his German heritage.

Angus Von Wigglebotton has grown into an incredibly social and loving member of the family that enjoys everyone’s company no matter the person or species. He loves long runs in the park, hanging out with his friends at doggy day care, and spending time with the family horse.

Sarah recently enrolled Angus Von Wigglebottom in pet insurance through Nationwide after learning about its benefits and experiencing firsthand the costs of veterinary bills with her previous Schnauzer.