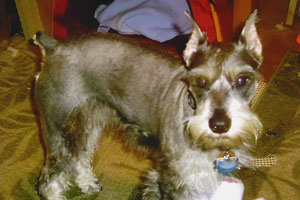 After the recent passing of their longtime family Schnauzer, Natalie Ann Young and Robert Lambert of Philadelphia, Pa., were looking for a puppy. One day they came across a pet store with a miniature Schnauzer living in terrible conditions and decided to save him.

After a visit to the veterinarian, they discovered he was ill and needed to be quarantined until deemed healthy. Once reunited with the outside world the puppy would get so excited to see people that he would fall down and scuttle around on the floor. The couple started calling him “Scuddles,” and after he seemed to always be under their feet, they added “Unterfuss,” which is German for “under foot.”

“When we finally brought him home, we were in the process of remodeling and he just seemed to be right under us all the time,” said Robert. “It didn’t matter what we were doing, he had to be right next to us, even when we were using power tools.”

It’s been nearly 10 years since they adopted Scuddles Unterfuss and he’s now matured into a confident, yet quirky dog that believes he’s the biggest dog on the block. However, to this day when he gets excited his feet still get ahead of him and he scuttles around like he did as a puppy.