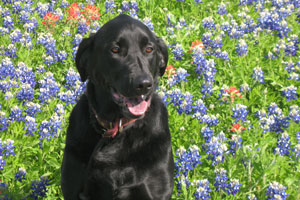 Kathy Warren and her family have always found the names of show-dog bloodlines entertaining. So the Warren family decided it would be fun to create their own quirky moniker for their newest member of the family. Wanting something regal yet fun, the Warren’s studied their new Labrador retriever’s attributes and realized the hair on his back legs was longer the front, making it seem like he was wearing furry pants, and the name Baron Von Furry Pants was born.

“Every time they call his name at the veterinary office, everyone in the room turns their head,” said Katherine. “People always laugh when they hear his name and see the long hair on his back legs. It really suits him.”

Baron, as he’s referred to in short, is a massive Labrador retriever that can frequently be seen on walks near his home in downtown Houston, TX. His favorite activity is chasing squirrels, even though he’s never able to catch them. In fact, every year on his birthday their daughter Erin makes him a giant squirrel cake!

However, Baron does have some non-Labrador-like characteristics. He’s afraid of water that’s more than a foot deep and he’s been known to be quite clumsy, which is one of the reasons that Katherine enrolled him with Nationwide. She knows that there’s always a possibility that his clumsiness could get him hurt and she’d rather be safe than sorry.