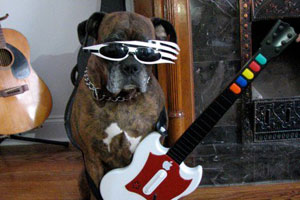 When Stacey Leopper of Chicago, Ill., picked up her new Boxer puppy she wasn’t quite sure what to name her. The puppy was registered with the American Kennel Club, but Stacey had to update the information with a name. She took notice of the unique canine dynasty names on the website and decided to make her own.

“There were all these crazy bloodline names, so I figured she needed something cool too,” said Stacey. “I decided to put my favorite TV show and movie together. The ‘Abigail Carmichael’ part of her name comes from one of the main characters on the show ‘Law and Order’, and ‘Spartacus’ refers to the character Agador Spartacus from the movie ‘Birdcage.’”

Abigail has been Stacey’s best friend and companion for more than 12 years. Abigail is incredibly social and well trained, and has even been described by many as being more human than dog. She is however, very spoiled by Stacey’s friends and family. Stacey purchased pet insurance through Nationwide to protect against any future accidents.

“Her age hasn’t affected her at all,” said Stacey. “I think having pet insurance is a great idea, especially with how active she is. You never know what can happen and it’s nice to know that we’re prepared.”