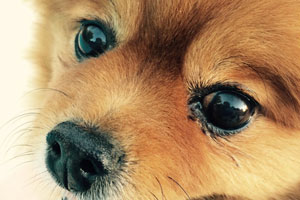 When Becky Summers of Austin, TX., was searching for a dog, she had her eye on Bulldog puppies. However, when she realized how expensive they were, she started to think twice. Becky had been planning a trip to Paris for months and knew that she would have to cancel the trip if she were to purchase a Bulldog. That’s when Becky’s mom, who happened to breed Pomeranians, stepped in and offered her a puppy.

“I didn’t really want a small dog, but it was best for me at that time,” said Becky. “That’s kind of how her name was born. I wanted it to represent how she came into my life.”

After some thought, Becky created the moniker Nutmeg Spice O’ Paris. The “Nutmeg Spice” represents the color of the tiny Pomeranian’s coat and the “O’ Paris” is an adaptation of her bloodline. Becky’s mom’s dogs were part of the “O’ Paradise” dynasty, so Becky tweaked it to reflect their situation.

“Everyone thinks she’s named after Paris Hilton and her little dog,” said Becky. “But after I explain what it really means, people usually love it. I think it’s perfect.”

Although Becky wanted big dogs at first, Nutmeg is now an older sister to a new Maltese puppy and Becky couldn’t be happier with her pack of pint-sized pooches.