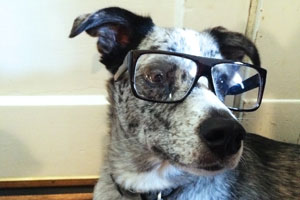 When Ryan Cockrell of Charleston, S.C. was searching for a new dog, he found an ad online for a young Catahoula-Husky mix. The young male was being raised by a family, but a moving issue had forced them to find him a new home. When Ryan met the pup, they bonded immediately. Ryan loved everything about him…except his name.

“The family had named him Linkin, after the band ‘Linkin Park,’ but I’m not a big fan of their music,” said Ryan. “He already responded to the name so I figured I would just tweak it a little bit.”

After fiddling around with a few names, Ryan decided to mix President Abraham Lincoln with the Ford Lincoln Continental car model. He enjoyed the word play and stuck with it.

Abraham Lincoln Continental is now Ryan’s best friend and sidekick. One of their favorite hobbies is to go skateboard sledding, where Lincoln pulls Ryan with a rope. Ryan purchased pet insurance for Lincoln as a precaution to combat any unforeseen incidents.

“I never want to have to make a tough decision with Lincoln because of money,” said Ryan. “I’ve had pet insurance for several years with my previous dog, and it really helps put my mind at ease.”