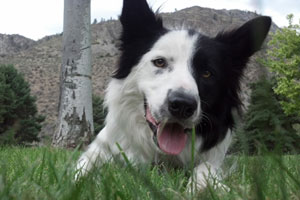 For Artoo Dogtoo, life was rags to riches after being adopted by Annette de Soto and Rahul Dodhia of Seattle, Wash. The family took Artoo in as a nameless foster dog. Since they already had one dog, they jokingly referred to him as Dog Two. Shortly after taking the Border collie in as a foster, Annette and Rahul fell in love with him and decided to adopt him. However, he had already become responsive to Dog Two, so they didn’t want to change his name. That’s when Annette’s “Star Wars” loving husband, Rahul, came up with the perfect movie moniker, Artoo Dogtoo.

“People love his name, especially ‘Star Wars’ fans,” said Annette. “The name really fits him, because he’s always following us around and is really handy, just like R2D2 was in the movies.”

Since being adopted four years ago, Artoo has gone from a shelter dog with a bleak future, to competitive sheep herder. Artoo loves competing and even takes his herding outside the field and into his everyday life.

“Artoo is constantly keeping a watchful eye,” said Annette. “He’s always worried that dogs are going to run away at the dog park and makes sure no one wanders off. He just loves everyone he’s around.”

Annette registered Artoo with Nationwide immediately after adopting him. After Nationwide was on her side during her previous dog’s cancer treatments, she says she’ll “never go without it again.”