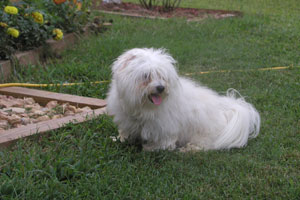 Ron Harken has been saving the lives of puppy-mill dogs for decades. On one trip, Ron drove from his home in Willow Springs, N.C. to Indianapolis to save a Havanese that was in foster care after being obtained at an auction. The poor dog had spent most of his days in a cage and wasn’t accustomed to the outside world. That night, with the dog in his custody, Ron was staying at a local hotel. When it was time to go to bed the dog started barking.

“I’m sure it was rough day for the little guy,” said Ron. “I don’t think he had ever been away from that mill and I guess all the change just caused him to bark. He wasn’t really barking at anything, he was just barking to bark. It was cute, but then he wouldn’t stop.”

After barking for the entire night, Ron and his wife came up with the moniker “Parker the Barker.” They enjoyed Parker so much that they decided to keep him instead of adopting him out.

These days, Parker has become Ron’s shadow, constantly following him throughout the day, that is… unless he’s sleeping.

“He’s a very loving dog, but it takes time to earn his trust,” said Ron. “Once he gets to know you, he’ll become your best friend. He’s a great dog, but he sure loves to sleep. I have to wake him up every morning or he’ll sleep past noon.”