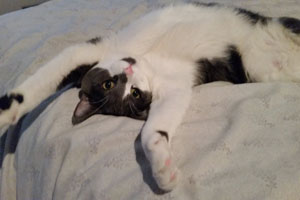 Last year, Judy Passer of New York, N.Y. was in need of a kitty companion. On the afternoon of Valentine’s Day she attended a small adoption event at a local pet store and saw a beautiful 2-month-old kitten. Judy instantly fell in love with him, but there was a problem. Several people had already applied to adopt him that day.

“He was such an adorable little guy, but I tried not to get my hopes up,” said Judy. “Over the next couple days, I was humming the song ‘Take a Chance on Me’ by Abba, hoping that the organization would take a chance on me. Little did I know, I had been singing the lyrics wrong the whole time.”

While the correct lyrics were “Honey I’m still free, take a chance on me,” Judy had been singing “Ollyoxenfree, take a chance on me.” Nearly a week later, Judy was notified that she had been chosen to adopt the cat, and decided that Ollyoxenfree had to be a part of his name. Shortly after taking him home, as she was signing Ziggy up for pet insurance, Judy looked up the lyrics to find the correct spelling of Ollyoxenfree and realized her error.

“It was quite embarrassing, to be honest,” said Judy. “I had already planned on naming him Ziggy, but I knew that Ollyoxenfree had to be a part of his name. It was kind of like a good luck charm. Now I think it’s perfect for him. He’s just as unique as his name is.”