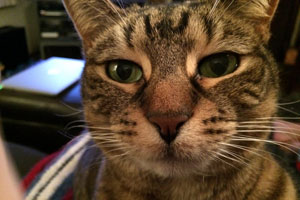 Heather and Doug Roemer of Alexandria, Va., have always put a lot of thought into naming their pets. They feel it should be a true representation of the animal’s personality. So when they adopted two cats from a local shelter, it was no surprise that a unique moniker like Zelda Nacho came to be.

“After getting to know this crazy tabby a little and seeing how energetic she was, we wanted her name to represent something wild,” said Heather. “We’re both avid readers, so we wanted it to have a literary tie-in as well.”

In their research, they came across the life of author F. Scott Fitzgerald’s wife Zelda, who was known to be a true free spirit. They decided Zelda was a good fit, but felt the name needed more. They have always given their cats two names, as inspired by T.S. Elliot’s poem "The Naming of Cats,” which suggests cats should have multiple monikers.

The name “Nacho” stemmed from the Halloween prior to the adoption when Doug dressed as the main character from Nacho Libre, one of Heather’s favorite movies. That Halloween was more special than any other, because it was the day Doug asked for Heather’s hand in marriage.

“People are usually intrigued when they hear her name for the first time,” said Heather. “But after we explain its meaning, people really enjoy it. We think it’s a perfect fit.”