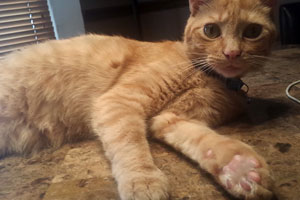 A couple years ago, Michelle Tiggs’ parents decided to get her a cat for Christmas. Michelle had recently moved away from her family to Cape Girardeau, Mo., and they wanted her to have a furry companion to keep her company. After picking up the cat at her parent’s house, Michelle drove home with her new kitty, but couldn’t’ decide on a name. However, the choice became clear once her roommate saw him.

“The first thing my roommate said was ‘he looks like a pancake,’” said Michelle. “I hadn’t noticed at first, but his golden tabby coat is the same color as freshly made pancakes. We named him Pancake right at that moment, but added captain shortly after because it fit his personality.”

Captain Pancake takes his name quite literally and is always trying to steal Michelle’s food. He commonly sneaks his way onto the dinner table when meals are served, and even once batted a piece of pizza straight out of Michelle’s hand!

When he’s not attempting to steal food, Captain Pancake loves to play with his sister Kaylee and get belly rubs from anyone who offers. Michelle purchased pet insurance from Nationwide shortly after adopting Captain Pancake to help with routine checkups and recommends it all new pet owners.