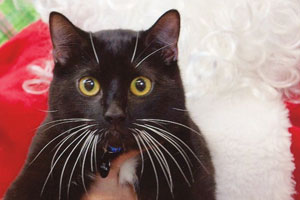 For Sherri Borden of Woodbridge Va., Fuzz Lighyear has truly “come to the rescue.” Fuzz, as he’s referred to in short, was adopted by Sherri’s daughter, Ashley, before she enlisted in the Air Force so that her mother wouldn’t have to come home to an empty house in her absence.

The family came up with the amusing moniker by making some variations to his temporary name from the shelter. In fact, the family adopted another cat from the same shelter and stuck with the Toy Story theme with the name Bo Peep.

“We never considered another name. Fuzz Lightyear just seemed perfect,” said Sherri. “When people first meet him, they think his name is awesome, and Toy Story fans absolutely love it.”

Fuzz Lightyear spends most of his days playing with his sister Bo Peep and running through his favorite kitty tunnel. That is… until mom comes home and the two become inseparable. Sherri enrolled Fuzz as a Nationwide member just after adopting him last year and feels that it’s an important resource for pet owners.

“I absolutely recommend pet Insurance from Nationwide,” said Sherri. “It really helps offset veterinary costs and you never know when you’re going to need it the most. It’s well worth the cost.”