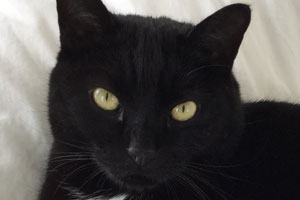 The story of Cornelius McPudness Vandercat begins at a festival in Virginia. Stacy Winters was in attendance when she heard there was a stray kitten on the railroad tracks just outside the event. Stacy curiously went to investigate, and spotted the emaciated kitten hiding in fear in the intense summer heat. After rescuing the palm sized kitten, Stacy decided to keep him as her own. She had always given her cats unique names and this kitten was going to be no different.

“I felt like his name needed to represent how he came to be,” said Stacy. “I named him after the railroad entrepreneur Cornelius Vanderbilt and just changed the last name a little. I added McPudness later as a nickname that just sort of stuck with him. The railroads made Vanderbilt a rich man, and those same tracks made our lives a lot richer by bringing us Cornelius.”

Cornelius has gone from a homeless kitten to being an important part of Stacy’s loving family, which includes two Welsh Corgis, of whom Cornelius loves to chase and boss around. Although he has an independent disposition, he still loves cuddling up to Stacy, but only on his terms.

Stacy has purchased pet insurance from Nationwide for all of her pets and feels it’s great for pets no matter what species.