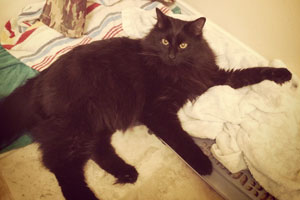 Bailey Norton of Oxnard, Calif. puts a lot of thought into how she names her pets. As a big fan of humorous puns, she tries to tie in her pets’ attributes with something similar sounding. When she noticed that her newest kitty had a lion-like face, she came up with the name “Leo,” and after some brainstorming the moniker “Leonardo DiCatprio” was created.

“People either have a nice chuckle or just give a blank stare when I tell them my cats’ names,” said Bailey. “Leo has a sister named Buffy Sumeowers after the main character in ‘Buffy the Vampire Slayer.’ I think my next cat will have a really basic name like Max, to offset his siblings’ awesome names.”

Leonardo DiCatprio’s name isn’t the only thing quirky about him. He uncharacteristically loves water and likes to jump in the shower. He also loves attention and is incredibly social.

This is the first year that Bailey has had pet insurance from Nationwide for her furry family members, and she’s happy with her decision.

“I think having pet insurance is something that all pet owners should look into,” said Bailey. “I feel comfortable knowing that Leo and Buffy will be covered if something were to happen to them.”