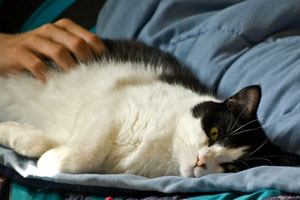 Greg and Sheila Gustafson of Saint Cloud, Minn. still aren’t sure why their son chose to name their cat Sir Theodorable Purrsalot, but they do know that the goofy name fits his personality.

“He’s a really quirky cat so his wacky name is quite fitting,” said Greg. “He runs around chasing nothing all the time and is constantly stalking us. We love him to death, but sometimes we think he might be a little crazy.”

Before Greg’s son Cody adopted Theo (as he’s referred to in short), the homeless kitten was taken to a local shelter after being found on a delivery truck that had just arrived in their hometown. These days, Theo’s life is a far cry from his rough beginning. He’s become a big part of the Gustafon family and is even referred to as their grandson. However, Theo views the family a little differently.

“He thinks we’re here to serve him,” said Greg. “We’re guests in his house now, but we have a ton of fun with him. When people meet him they think his name is hilarious, and they definitely understand why he has a ‘Sir’ in his name by his sense of self entitlement.”