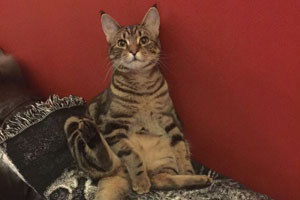 Missy Salaam of Boca Raton, FLa. is the definition of a dedicated cat lover. She takes the time to give each of her furry family members distinct, yet fitting names, including her 1-year-old male Sir Nigel Meowmittens of Oscelot Court.

“I feel like average pet names are lame,” said Missy. “I think people should be creative when naming their pets and find something unique that represents them.”

Every component of Sir Nigel’s name includes a different description of who he is. Missy chose “Meowmittens” because he’s a very talkative kitty, and it looks like he’s wearing mittens on all his paws. She chose “Ocelot Court” because his coat is covered with Ocelot spots. Finally, she chose “Sir Nigel” because she wanted something that sounded royal to match his regal personality.

Sir Nigel lives with his three other kitty siblings who have names nearly as wacky as his, including his brother Winston Oliver Crookshanks III. Sir Nigel is a mischievous cat that loves snuggling with his mom, and enjoys feasting on his favorite snacks of whip cream and Brussel sprouts.

Missy has registered all of her cats with pet insurance from Nationwide and recommends it to all pet owners as a valuable tool to help with unexpected costs.