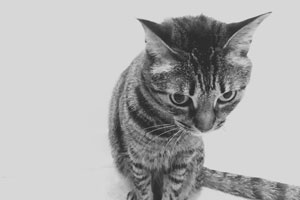 After Melissa Moore of Los Angeles, Calif., rescued a 3-year-old female cat from a local shelter, she needed help coming up with a name, so she turned to Sophia her 6-year-old daughter. Sophia, who’s a huge Star Wars fan, blurted out “Star Wars Steve.”

“She was in love with Star Wars at that age,” said Melissa. “I wasn’t sure there was anyone named Steve in Star Wars, but that was the name she wanted so we went with it.”

Star Wars Steve pairs perfectly with the family’s dog Lou, who is also a female pet with a traditionally male moniker. However, their names are the only thing the two have in common. While Lou loves attention, Steve is an independent cat who lives life on her terms, except for at night, when she enjoys cuddling with her humans.

Melissa signed Steve up with pet insurance from Nationwide just after adopting her and feels it’s something that all pet owners should have.

“Our pets are part of the family and they should be insured too,” said Melissa. “Having pet insurance from Nationwide gives me peace of mind when our animals need to go the veterinarian. We’re never forced to make tough decisions when something unforeseen happens.”