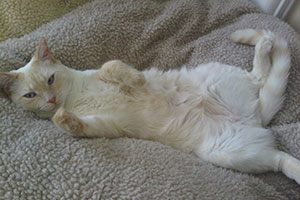 Carmelene Corona of Whitmore, Mich. had no intention of getting a cat, until one day when she took her dog to the veterinary office where her daughter worked. After the dog's examination, her daughter pointed out that someone had dropped off a litter of kittens and Carmelene went to take a look.

"I wasn't looking to keep any of them, but then I saw this little fluffy white cat with bright blue eyes" said Carmelene. "My father had recently passed away and had the same color eyes. It was a sign, so I took him home."

Carmelene initially donned the new kitten with the moniker of Sebastian in honor of her late father, but the tiny cat never responded to the name. Later that week, Carmalene's musician husband played a show at a local venue and Carmelene found her inspiration.

"The band played a few David Bowie songs and I got the idea for Ziggy after Bowie's alter ego Ziggy Stardust," said Carmelene. "I changed the last part to 'Snowdust' because of his bright white fur."

That night when the couple returned, Carmelene opened the door and yelled "Hey Ziggy, Ziggy Snowdust," and for the first time since joining the home, the small kitten perked up his ears and responded to his name.

Ziggy Snowdust is now a full grown adult with a feisty attitude and a macho bravado. However, he loves the sound of the piano, especially the tunes of classical music.

Carmelene purchased pet insurance from Nationwide because of the lifelong support they had received for her recently passed dog, who barred an equally unique name of Lionel Lionheart of Lakewood.

"I love pet insurance because it gives me the peace of mind knowing that my pets will be covered if something happens," said Carmelene. "I think it's a great value that all pet owners should have."