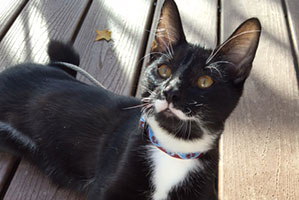 When Colleen Kelly of Warren, Pa. brought a new cat into her home, she wanted to give him a name that represented his character. She initially wanted to name him Bob because of his rare stubby, bobbed tail, but she had second thoughts after considering that her neighbors name was Bob and realizing that there may be some confusion when the cat was outside.

"As I was trying to figure out what to name him, I picked him up and he went totally limp in my arms like a noodle," said Colleen. "He's kind of short and macaroni is a smaller noodle so I just put it all together and came up with Macaroni Bob."

Macaroni Bob's personality is just as wacky as his name. Macaroni Bob will do anything for food, no matter what kind it is, and even has an arsenal of tricks he'll perform for his treats.

"He definitely acts more like a dog than a cat. He follows me everywhere throughout the house," said Colleen. "I have two Dachshunds and Macaroni Bob constantly picks on them because he's bigger. He even steals their treats."

"Pet insurance has been great for us," said Colleen. "I've been very pleased with the coverage we have and recommend it to all pet owners."