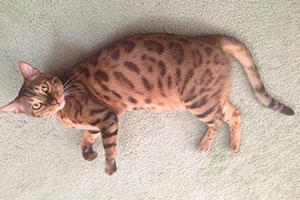 After Barbara Von Holleben and her family of Oldsmar, Fla. brought home their first Bengal cat, they fell in love and decided to expand the family with a couple more. As fans of literature, they named their first cat Romeow, so when they brought in a female kitten, the name Juliet was a given. But after bringing in a third cat, they were a little stumped on how to keep the trend going. As they pondered how to complete their feline tale, they realized the story wouldn't be complete without the surname of the writer and began playing with the name Shakespeare. After a few pun-filled modifications, the moniker of Shakespurr was born.

"We always put a lot of thought into naming our pets. Our first cat went more than week without a name before we made our decision," said Barbara. "We've always had interest in literature, especially Shakespeare's work. So after the first two cats, Shakespurr fit perfectly."

Shakespurr is in an athletic cat who never lets his guard down. He loves perching on the highest shelves and ledges he can find in the house, remaining on constant watch. However, Shakespurr loves his family, and when called, will come sprinting to his owners' side from anywhere in the house.

Barbara purchased pet insurance through Nationwide after her other cat, Juliet suffered complications while ill, leading to a costly medical bill.

"We'd do anything to make sure our pets get the care they need, and after spending so much to save Juliet, we started looking at Nationwide," said Barbara. "I think pet insurance is a great idea to help with veterinary costs, and I think everyone who owns a pet should have it."