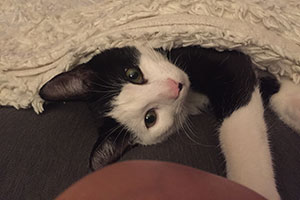 When Amey Rene' and her family of Van Nuys, Calif. rescued a kitten from a litter of strays, they sought out to name him something unique. Amey has always been a fan of unique pet names and settled on the name Pickles, but after getting to know the kitten for a few days, she decided it needed more.

"His regal personality gave us the idea to don him with a more distinguished name," said Amey. "We joked that he seemed as if he was from a long lineage of royalty and the name Sir Pickles Pennybottom just came to us. We even added 'of the West Coast Pennybottoms' to his full surname because we joke that he's the only one to come out West to California."

"He's definitely the boss of the house with all my other pets," said Amey. "He steals their bed when he feels like it and has no problem playing rough with any of the dogs. Sometimes we wonder if he thinks he’s a dog."

Amey enrolled Sir Pickles Pennybottom and all his siblings in pet insurance through Nationwide, because of previous experiences with her pets

"I've always had pets and I know how expensive their veterinary care is. Having pet insurance makes it easier to go to the veterinarian without stressing about costs," said Amey. "Pets are our family members and I think they should be covered just like the rest of us."