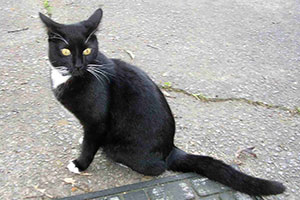 Mike Monahan has always created clever names for his pets. So when he adopted a pair of kittens that were left on his local veterinarian’s doorstep near their home in Atlanta, Ga., it was no surprise that a pair of hilarious monikers were born. It was determined that the kittens had been born on April 22, 2013, which happened to be Earth Day. Mike and his girlfriend pondered names that could stem from this occurrence and stumbled upon the fact that Paul Newman was a huge advocate for the environment.

After running through some Paul Newman characters and fooling around with some puns, the names Butch Catsidy and the Sundance Kit were born.

"When people in the veterinary office hear Butch and his brother's name, they love it," said Mike. "Everyone gets the joke and they think it’s clever when we explain the Earth Day birthday."

Butch, as he's referred to in short, fits his title as a natural leader amongst his cat siblings. Butch is an incredibly athletic cat that enjoys playing outside and chasing squirrels out of his backyard. But don't let his ruggedness fool you, he loves human interaction and greets everyone with a barrage of meows.

Mike purchased pet insurance from Nationwide for his cats to help with any mishaps that may occur in their active outdoor lives.

"I want all my pets protected just like I am," said Mike. "Pet insurance has been invaluable for us and I wouldn't be without it."