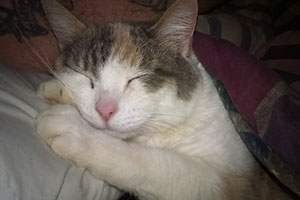 Michele Zebrowski of Glenville, N.Y. had no intention of adopting another pet until her husband was called upon to help a stray cat that was stuck in a tree. After helping get the filthy feline to safety and realizing she had nowhere to go, Michele brought her home.

Michele's family gave the cat the temporary name Princess after they arrived home, but knew the moniker needed more. As Princess began adjusting to her surroundings, one unfamiliar aspect she was perplexed by was the litter box. Michele had a litter box in the house for her other cat so it didn’t take long for Princess to try it out. However, her first attempt didn't go very well after Princess stepped in her own stool and left paw prints around the room.

"It was pretty disgusting, but it was an accident and nothing to get mad over," said Michele. "We cleaned up the mess and the name Princess Poopy Paws just kind of came to me, much to the horror of my family. Most people think it's pretty funny, especially at the veterinary office."

Princess Poopy Paws has since adjusted to her new habitat and enjoys sleeping during the day and playing late at night. She loves her new family and is obsessed with cuddling and giving kisses. Michele signed Princess Poopy Paws up for pet insurance through Nationwide after discovering it was offered as a voluntary benefit through her work.

"I had no idea pet insurance existed until I heard about it at work," said Michele. "I thought it would be a good idea to cover routine checkups, but it has helped with far more than that."