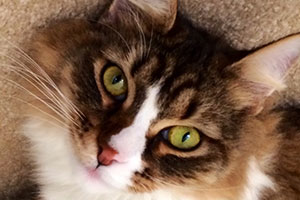 For Amber Valentine and her family of Fairfax, Va., naming their pets is no task to be taken lightly. Pet names are chosen using a system in which Amber and her two daughters all present an idea during a family meeting and the best two options are incorporated. However, when the family adopted their newest kitten, the rules were bent and a magnificent moniker was born.

"I think it's important that everyone in the family gets a say," said Amber. "As the mom of the house, I get a veto power for anything unfitting, but our method has created some pretty cool pet names, like Molly Cheescake and Oswaldo Potatoes."

After getting to know the freshly homed feline, the family brought their ideas to the table to discuss. Amber suggested the name Enzo after reading in a baby name book that the title represented leadership. Amber's oldest daughter brought the name Asparagus to the table after the T.S. Elliot poem Cedar Cat. Finally, the youngest daughter selected the name Santa because the cat's fur patch looked like a long white beard. With all three monikers being strong options, the family decided to use them all and the name Enzo Asparagus Santa was born.

Enzo Asparagus Santa has now grown into a sweet and gentle cat who loves lying on peoples' laps and playing with his catnip.

"Enzo is our good cat and his brother is the annoying one," said Amber. "Enzo is so sweet and never does anything wrong, but his brother is constantly knocking stuff over and bugging the other pets."

Amber enrolled Enzo Asparagus Santa in pet insurance from Nationwide as preparation for any future medical procedures he may need.

"I think having your pets insured is really important," said Amber. "Our pets are members of the family too and having them covered gives us peace of mind."