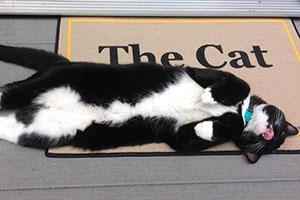 When Angela Farrell of St. Petersburg, Fla. adopted a new kitten from the shelter, he came with the unfitting name of Dusty. The kitten had black and white fur which resembled the looks of a tuxedo and had few features that represented anything that justified his given moniker.

As she pondered new names, Angela, who is a classically trained violinist, listened to Mozart concertos. As the music poured through the speakers she looked over to see her kitten listening intently and bobbing his head to the rhythm.

"It was really cute, he looked like a miniature cat conductor," said Angela. "I started thinking about Mozart, whose full name is Wolfgang Amadeus Mozart and Meowmadeus just came to me."

Despite some common confusion on how the moniker is pronounced, Meowmadeus' name is a hit wherever he goes, which is quite a lot of places. Meowmadeus has an amazingly adventurous life that includes camping and long road trips. Meowmadeus even has a special place in the car where he can look out the window and act as a co-pilot. Meowmadeus’ favorite activity at home is going for a walk on a harness. He even begs with loud bellows when he hears the word “walk.”

Angela purchased pet insurance from Nationwide as a precaution due to Meowmadeus' active life.

"I love that my cat has medical coverage," said Angela. "I know that I'll never have to think twice about taking Meowmadeus to get veterinary attention. We insure our kids and ourselves so why not insure our pets?"