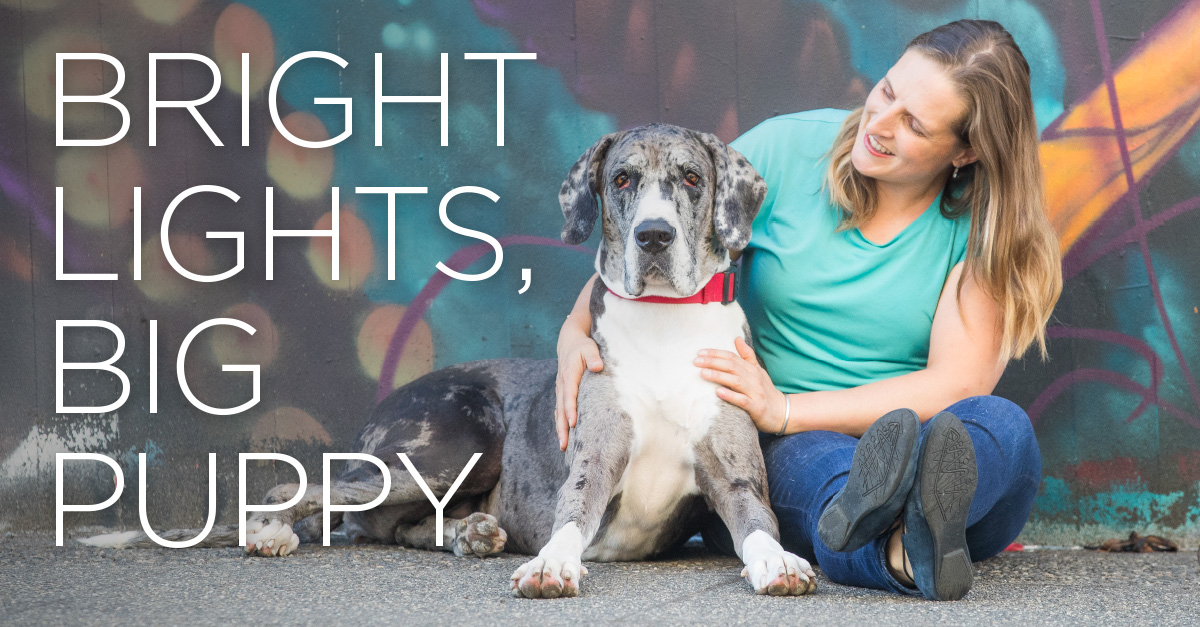 The gift of prevention

When most people think of a “city dog,” they don’t imagine a Great Dane—but for the Gunnarsons, city living wouldn’t be the same without their king-size canine.

Bryan and Melissa Gunnarson spent years searching for a place they could call their forever home. “We moved here from Chicago,” says Melissa. “Before that we were in Virginia. We've been in Seattle for over ten years now, and I think this is going to be home.”

However, despite finding a city to call their own, their family still didn’t feel complete. Then, along came Freya.

Dogs had always been a part of Bryan’s life since childhood —a part that he missed as an adult. “I had a Lab-collie mix growing up as a boy,” Bryan says. “We lived out on a farm, and so I was used to having a medium to larger-size dog.

“When we moved to San Diego, my family switched to small dogs. I had a French poodle as a young boy, and then I got a toy fox terrier and a dachshund. I think my parents were worried that if we got a bigger dog, they'd have to take care of more things.” But Bryan’s love and appreciation for big dogs didn’t disappear with his new, more urban surroundings.

During an inspiring trip spent walking the El Camino de Santiago, she had a change of heart. “El Camino is a 500-mile pilgrimage in Spain,” says Melissa. “It’s just like walking and praying, and it was just this really great time of reflection. I came back super Zen, and I was like, ‘We should be happy now. We should get a dog now.’”

She adds, “I’ve just tried to live more in the moment, and Freya certainly helps us a lot with living in the moment. So, it's been good.”

With Melissa on board, the Gunnarsons set to work preparing their lives (and their home) for a new addition. However, they didn’t envision just any lapdog—Bryan and Melissa wanted a Great Dane.

Full-grown Great Danes can weigh between 110 and 175 pounds and stand more than 3 feet tall at the shoulder. The largest Danes clock in around 200 lbs. They are—it can’t be stressed enough—very big animals. All that didn’t matter to the Gunnarsons.

“We both just loved how they looked. They're such a majestic, gorgeous breed,” says Melissa. “They just look like they're very gentle,” adds Bryan. “When we got to know the breed more, we discovered that they're just fabulous dogs. I don't know if I would have another breed at this point.”

The Gunnarsons searched at local rescues with no luck. When the Gunnarsons heard about a litter of Dane puppies at a local breeder that needed a home, they jumped at the chance.

“So, we get down to the puppy barn, and they were yelping and chirping and jumping on both of us—like, cuteness overload. After about 15 minutes, all that puppy energy diffused, and they went back to their little beds. The one remainder was Freya, and she stayed at my feet and she fell asleep," recalls Bryan, just before his voice breaks. "I'm going to get all teary."

A lifelong connection was made, and within weeks Freya had a new fur-ever home with the Gunnarsons. Little did Bryan and Melissa know at the time, adding Freya to their lives would introduce them to a whole new community in their own backyard.

Big dog in the big city

Having a big dog in a city isn’t easy. It’s not uncommon for large breed owners to host “meetups” to build a network with other owners around their shared experiences—and, of course, their passion for their pets.

“We were really lucky that we got connected with a Great Dane community in Seattle, and so there was a lot of Great Dane meetups that we went to,” says Melissa.

These meetups are great for the owners, but equally important, they are a way for the dogs to connect with pups of comparable size

“So,” Melissa continues, “all the dogs came, they all got to wear the birthday hats, we took some pictures. They went swimming at the river and they go chasing each other in the grass. We usually invite Great Danes, but our Danes sometimes have brothers and sisters that are smaller dogs, and that's okay. But Great Danes play special with each other.”

Some members of the Seattle Great Dane community warned the Gunnarsons about potentially deadly health problems these majestic dogs face. “One of the biggest health concerns for Great Danes is bloat. It kills large breeds, not just Great Danes, but labs, huskies, some other large breeds,” explains Bryan.

“In short, their stomach isn't attached to the inside of their abdominal wall. If they eat really fast, either the esophagus or the small intestine can tie around the stomach, and that can cause the blood to shut off. It’s incredibly painful and they die pretty quickly unless you get into an emergency surgery.”

Thankfully, veterinarians can now prevent bloat with a simple surgery. “Often when Dane owners get their Danes spayed or neutered, they'll do a stomach-tacking called a gastropexy, since they're already under general anesthesia. It cuts down the likelihood of stomach torsion by about 97 percent. So, when she got fixed, she also got her gastropexy—and she's been doing great.”

Help when it matters most

Bryan adds, “What was nice about engaging with Nationwide insurance is that we were able to make that choice for her and not have to worry about the money. The price of it out of pocket would be pretty large.”

Melissa adds, “Yeah, we probably wouldn't have been able to afford both procedures at once without the Nationwide insurance, and that would have put her at more risk if we had to do the spay, save up, and then do the gastropexy. Plus, she would have had to be put under twice. So, it was good.”

An ounce of preparation

Bryan adds: “We get everything from Freya’s heartworm to her immunizations, and everything gets covered. Because we're kind of new at this, we'll also call the vethelpline for advice when we need it. What’s great is they'll even call me back to check and see if Freya is feeling better.

“I will spend all of our money on Freya, right? But, having pet insurance means that we can provide the care that she needs without worrying about going broke—it’s good for her, it's good for us.”