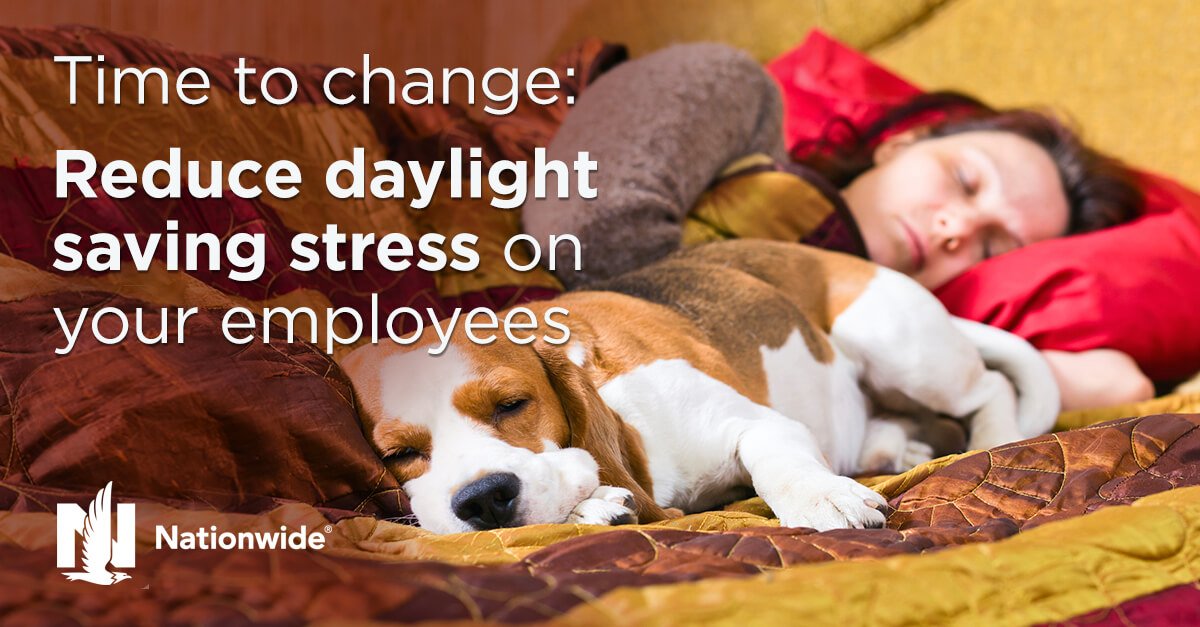 Feeling tired? You're not alone. The twice-yearly time change affects everyone in the U.S. (except in Hawaii and most of Arizona, where it isn't observed), and "springing forward" to daylight saving time in March is widely regarded as a more difficult adjustment than "falling back" to standard time in November. In fact, circadian-rhythm disruption caused by the time change has been linked to everything from increased traffic accidents and workplace injuries, to a higher risk of having a heart attack in the days immediately following the switch.

That may seem like a stiff price to pay for an extra hour of daylight—but the time change isn't the only sleep-related issue workers have to deal with. According to the CDC, more than a third of American adults get fewer than the minimum recommended 7 hours of sleep per night, putting them in danger of developing multiple chronic diseases and conditions, and an estimated 70 million suffer from sleep problems.

This toxic sleep culture spills over into the workplace, where 61 percent of employees report that sleeplessness has a negative impact on their work, with effects that can include difficulty focusing, completing tasks and staying motivated. And it hurts companie' bottom lines as well: a 2016 study by RAND revealed that the U.S. as a whole loses just over 1.2 million working days a year due to sleep deprivation.

With all this in mind, there's a lot you can do as an HR professional to help reduce the impact by encouraging better sleep habits among employees. A few possibilities:

The RAND study recommends creating brighter workspaces that incorporate facilities for daytime naps, as well as discouraging employees from using electronic devices after work—their screens emit light that disrupts production of melatonin, a critical hormone for maintaining healthy sleep/wake cycles and preventing burnout. Also, making sure employees have access to the right benefits can prevent any worries that keep them awake at night.

To get past any short-term stress caused by the time change, experts recommend easing into it by setting alarms to wake up earlier in the days leading up to the change. Eating a morning meal tells the body it's time to wake up, and increasing sunlight exposure can help reset internal clocks, so consider providing breakfast and organizing group walks for employees during the first week.

Keep pets close (but not too close)

If employees are still having trouble getting to sleep, why not encourage them to cuddle up with the family pet? Despite what you may have heard about the effects of sleeping with pets, the Mayo Clinic has actually found that allowing a dog in the bedroom doesn't harm sleep efficiency, which is the amount of time spent sleeping compared to the amount of time spent in bed. In their study, people whose dogs shared their rooms achieved a more-than-satisfactory sleep efficiency score of 83 percent. (This dropped to 80 percent when the dog shared the owner’s bed, so it's probably a good idea to buy Rover a cozy cushion of his own.)

Share these tips with your employees, and soon they should be resting more easily. And don't forget that even though the adjustment to daylight saving can be rough, it's temporary: within a few days, a new rhythm will take hold, and everyone will be ready to enjoy the longer days of spring and summer.