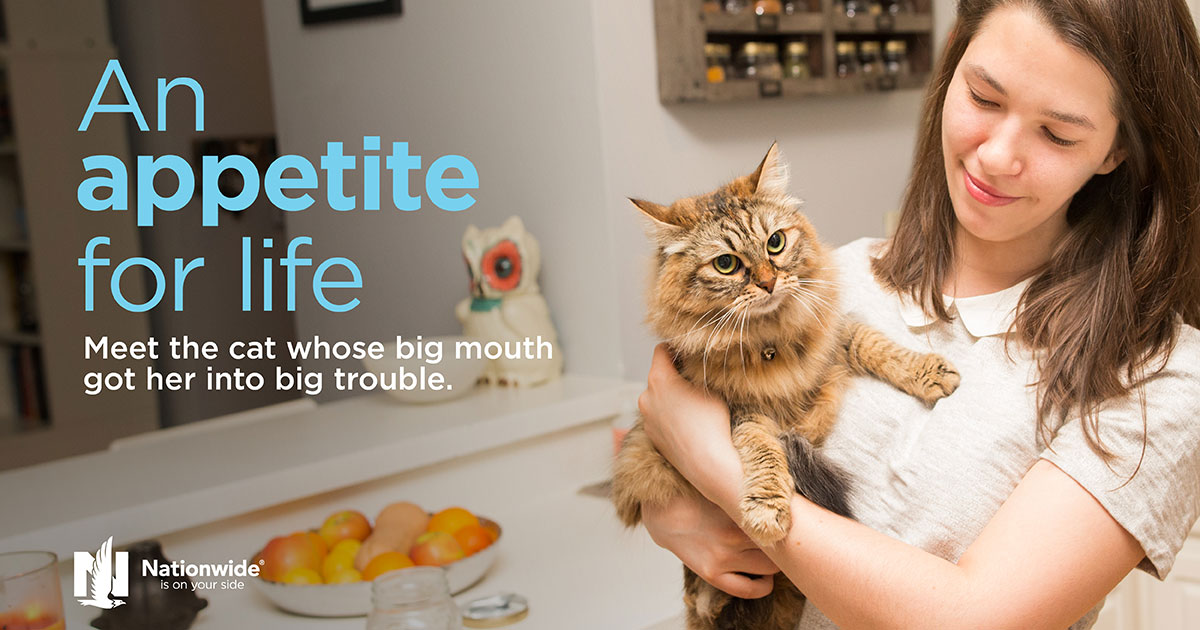 Clara wanted a Siberian Forest kitten ever since she left home for college, even though she was a student with a meager budget.

"I was living by myself in a fairly new city, and I just wanted … kind of depressing, but I just wanted a companion," she explains.

By the time Clara had enough money in the bank, she had already met her boyfriend, Nick. Even though she was no longer lonely, she still went to the breeder's to see the kittens and immediately fell in love with Elsi, the pick of the litter. Clara held her for a moment, and the two of them were instantly attached.

"She was super-tiny and easy to hold," Clara remembers, as she cups her hands to show how Elsi once fit snugly in her palms.

Still, even in that tender moment, Clara saw a twinkle in Elsi's eyes that predicted a future of mischief.

When spicy is dicey

One day when Elsi was still a small kitten, Clara made her signature pasta sauce, which she says is "very oniony, very garlicky and very delicious for humans." Clara left a pot of it to cool on the stove while she went into the living room to watch TV with Nick. Elsi snuck into the kitchen, jumped up on the counter and helped herself to some. When Clara and Nick walked into the kitchen later, they knew what Elsi had been up to.

"We were 100 percent sure, because she smelled like Italian herbs," Clara explains. "And her entire face was red from digging around in the sauce. It turns out she ate about half a cup of the pasta sauce."

Soon, Elsi looked so sick that Clara realized that her little kitten's life might be in jeopardy. Clara and Nick put her in a pet carrier and took her straight to the emergency hospital.

The good news was that due to Clara's quick response, Elsi’s life was saved. The bad news was the bill.

"It was very expensive because Elsi had to stay overnight. They gave her activated charcoal, and they had to give her an IV to rehydrate her, so it was a lot of money," Clara remembers.

"That was before I had the insurance," she adds. "And because I didn't have money to spend on veterinary bills, I had to ask my mom to step up to the plate to cover Elsi's hospital expenses."

Clara's mother came through, but she wasn't thrilled. "My mom was not happy that Elsi had eaten something I had left out," Clara recalls. "She said, 'Next time this is your responsibility.'"

Clara took that responsibility seriously. She looked over the flyers at her vet’s office to determine which pet insurance policy to get so she could take care of Elsi in the best possible way.

"Nationwide definitely had the best policies for emergency visits," Clara says. "So I went with them."

Clara got pet insurance just in time. About a month later when Clara made pasta sauce, Elsi got into it again. This time, even though Clara had carefully covered the pot after dinner, Elsi discovered some sauce on a dirty dish in the sink and licked the plate clean.

Again, Clara and Nick took Elsi to the emergency hospital. Fortunately, this pasta misadventure wasn’t as serious as the first one. Afterwards, Clara realized she had only been concerned about Elsi's health—and not about the bill.

"The first ER was for two overnights and cost $1,200, which is what had upset my mom. The second time Elsi only stayed one night, and that was about $800. But that time, when it was totally my responsibility, Nationwide covered almost everything, and it was a huge, huge help."

Clara and Nick had learned their lesson and were more careful than ever about leaving food or dirty dishes out. But it turns out that food wasn’t the only edible Elsi wanted to taste.

"It was spring, and one day, I asked Nick why he never bought me flowers," Clara remembers. "He didn't have an answer. So when I went shopping, I bought myself some."

Nick chimes in, "Later, we were sitting down in the living room watching some show, and Elsi comes in and her whole snout is yellow, and I was like 'That's really weird. What in the world did she get into?'"

By the time Clara realized that Elsi had eaten the flowers she brought home, Elsi was lying on the floor—and she wasn't moving at all!

Clara and Nick immediately rushed Elsi to the emergency room. As the vet examined her, he explained that pollen from a lily is extremely dangerous and can cause kidney failure in cats. He told them that ingesting lilies is one of the highest risks for cats in the spring.

"Can you believe it? Turns out the flowers I bought are like one of the most poisonous flowers for cats. They were lilies," Clara says.

It was a long night as Clara and Nick sat in the waiting room to hear how Elsi was faring, but finally the vet came out with good news: It was a close call, but Elsi was fine. And even though the bill was for $804, Clara was relieved knowing that Nationwide covers plant poisonings.

Clara found out about food and plant toxins—and now knows how to protect Elsi, no matter what her little companion gets herself into.

Once they were confident in their ability to be responsible pet parents, Clara and Nick made an addition to their family: a delightful, domestic shorthair cat named Sebastian. The first thing they did was get him Nationwide pet insurance.

"With Nationwide, I'm not worried about having thousands of dollars of vet bills, which is a huge relief," Clara says. "I can take Elsi and Sebastian to the vet regularly or the emergency hospital, if needed. I can always get them treated, and it won't be a huge issue."