From shelter to spotlight 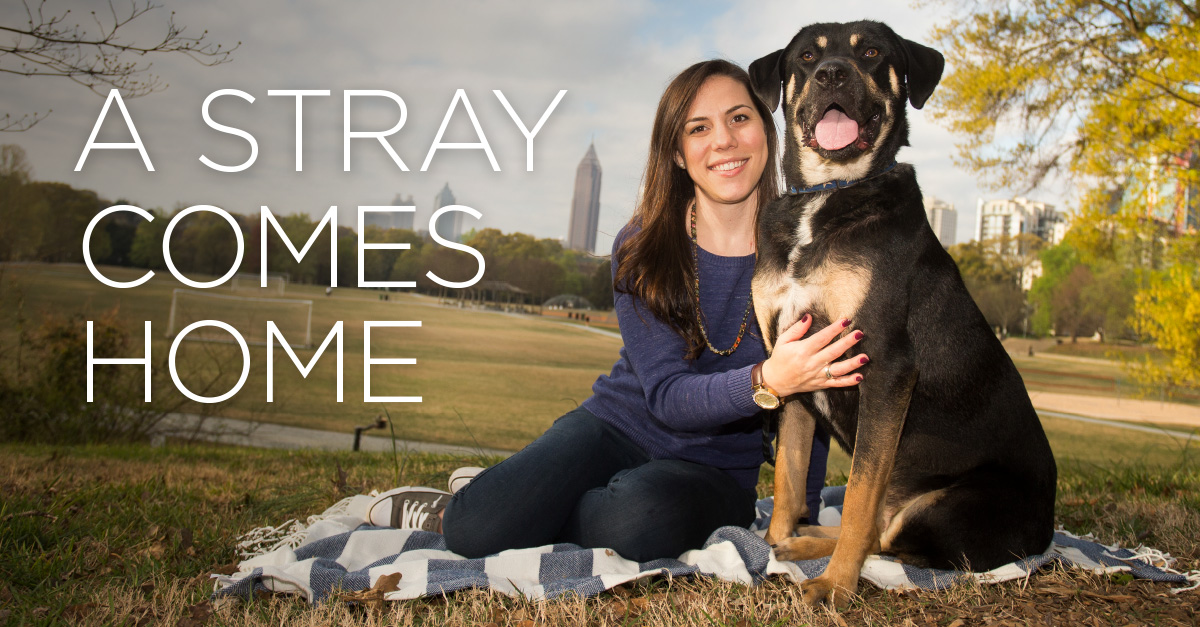 “It was just a matter of time,” recalls Atlanta resident Jessica Starobinets. “With Theo, the timing just worked out perfectly.”

True friendship doesn’t always arrive on schedule, but it’s never late. “I had wanted a dog for about three years when I first moved to Atlanta, but I knew that I didn't have the time,” Jessica says. Then, along came Theo, an 87-pound mutt with an adorable mug who would transform her home (and some of her furniture) forever.

Through a historic blizzard, separation anxiety and unexpected illness, Jessica and Theo overcame fear and uncertainty together to build an unshakable bond.

“I grew up in Southern Indiana in a medium-sized town, and we had two dogs – Welsh Corgis, Seamus and Sophie. We had them since I was five, and they were wonderful. When they had both passed, we lasted five days without a dog.” says Jessica. “Pets have always been such an integral part of our family. So, I knew when I moved to Atlanta that I wanted to get a dog, but at first, I was super busy with my career.”

After three long years in the city without a companion, Jessica saw a Facebook post that would alter her life’s trajectory. Some local Kennesaw State University students were in search of a home for a handsome stray that they’d rescued in Mississippi. “He was just the cutest dog I'd ever seen,” Jessica recalls, thinking back on seeing that first photo. “My job had slowed down by that time, so I knew the moment was right.”

Through the ice and snow

After contacting the students, Jessica made plans to drive up to Kennesaw, about 30 miles outside town. The weather had other ideas, though.

Turns out, the day that Jessica set aside to adopt Theo was the day of a historic winter storm – the famed “Snowpocalypse” in Atlanta. The city was totally unprepared for all the snow and ice that came, and people were stranded on the roads for hours.

“My roommate, being the Indiana guy that he is, had a four-wheel drive pickup truck. He was just as excited to get Theo as I was, so he offered to drive up there in the snow and sleet to go pick him up.” After many hours spent creeping along treacherous, icy roads, Theo was finally home.

For Theo, the connection with Jessica was instantaneous, like second nature. “The first night I told myself that I was going to keep him in his crate, but he cried the entire time. So, that's how he started sleeping in my bed with me. And ever since then, he follows me around everywhere. He's attached to my side.”

Inseparable (and then some)

At first, that bond was a little too strong. Theo’s transition into Jessica’s life didn’t come easily. When Jessica left to go to work or run errands, Theo didn’t take it well. “I think a lot of that has to do with the fact that he was a stray dog for a while.”

“He had a lot of separation anxiety at first,” she says. “He was very destructive when left alone. He actually tore up my roommate's couch – just completely tore it to shreds. He was just so high energy, and I had a lot to learn when it came to training and obedience.”

Facing an uphill battle, Jessica called in a professional to help Theo get comfortable. “We hired a dog trainer to work one-on-one with us. At first, I didn't know how to communicate with Theo, and I didn't know how to tell him yes or no. Our trainer was extremely helpful, and that was the turning point. He learned to trust me.

“We got over the separation anxiety, and he’s grown into the wonderful dog that I always knew that he could be. It's taken us two and a half years to get here, but he's an absolutely fantastic dog now.”

A day at the river turns dangerous

Some months later, after a beautiful day swimming and playing fetch in the river, Theo started favoring one of his paws. Jessica found an abrasion near his ankle with some minor swelling and started treating the cut with antibiotic creams to prevent an infection. They both returned to normal life without a second thought.

Then, one evening several days later, Theo went from running around and playing like usual to limping in about an hour. “He hadn't yelped or anything, and I got really concerned because it was very out of character for him,” she recalls.

“We went to the emergency vet, and they thought that he may have sprained his ankle. So, we did some x-rays and bandaged it up just as if it was a sprained ankle.

“Two days later I noticed the swelling had doubled. It was about the size of a softball, and that was very scary. I called the vet. The vet that we go to is absolutely wonderful, and they remembered him. They were really concerned.”

On top of that, Jessica noticed that Theo had some swelling in his other joints. She was worried it could be an autoimmune disease, an allergic reaction, or something worse. To get to the bottom of it, the vet performed several tests, including joint biopsies, a urinalysis, and numerous x-rays. Meanwhile, Theo’s condition worsened.

“I could tell he was in a lot of pain. He wouldn't walk around. He was panting and sweating. It absolutely broke my heart,” Jessica remembers.

Finally, the veterinarian came back with good news. The culprit was a tough bacterial infection that had gotten into Theo’s bloodstream and started attacking his ankle joint. By changing Theo’s treatment regimen, the vet was able to beat the infection. “We got him on the right course of antibiotics, and within two weeks it was completely 100-percent back to normal,” Jessica says. “It was very scary, but luckily for us the infection was easily treated.”

Support when it matters most

Now that Theo was responding to treatment, Jessica prepared herself for another kind of frightening situation – the vet bill. “We ran a lot of tests to figure out what was going on. The cost was very high. I'm still early in my career and having to pay several thousand dollars out of pocket is really scary.”

A few months earlier, Jessica signed up for Nationwide pet insurance as an employee benefit at work. She’s glad that she did.

“I was dipping into my savings account to cover a lot of Theo’s tests. I was so grateful that I had made the decision to go with Nationwide, because my plan absorbed most of the costs.”

“After diagnostics and treatment, the vet bills came out to about $1,800. Nationwide covered a full $1,200 of that. The way I see it, $600 for a major incident is totally doable, especially compared to the $1,800 that it would have been.”

“My family and friends thought I was a little crazy for getting insurance for my dog. However, now they've been asking me, ‘What company do you use?’”